Charging a Nexus 7 via USB: Not via notebook...

After unpacking my Nexus 7, i was suprised, that the usb-charger showed 5V and 2A... All of my usb-chargers only had 1A so far. But after trying the chargers with 1A, no charging happened. My first notion was: I got a broken Nexus 7 - but then i tried the power-usb-charger with 2A and then:

The usb specification (take a look at wikipedia) states:

From google if found the following: 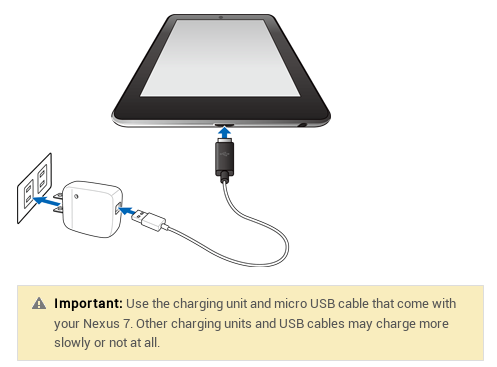 One nice discussion about this can be found here. I liked this posting:

Interesting, well I guess we'll just have to see. I haven't found many
USB chargers that can output 2amps, none the less the charger for the N7
should easily charge my Nexus S which still leaves me with the desired
outcome of one charger to charge them all. (my tried and true ipod
class, Nexus S, and soon N7)


This is a really problem: Even at amazon you find not many usb chargers with 2A. And the reviews of these adapters is in most cases only two stars or less ;-(

Posted by Dietrich Schroff at 8:56 PM