After installing VMWare 2.0 and VirtualBox 2.0.2 i wanted to make a comparison of both virtualization engines. I thought about installing the same guest in both software stacks. But this seemed like too much work ;-). So i started to google about migrating a guest from VMWare to Virtualbox.
I found this helpful blog.
So it is very easy. I created a new Virtual Machine like shown in my posting about VirtualBox and at the step Virtual Hard Disk 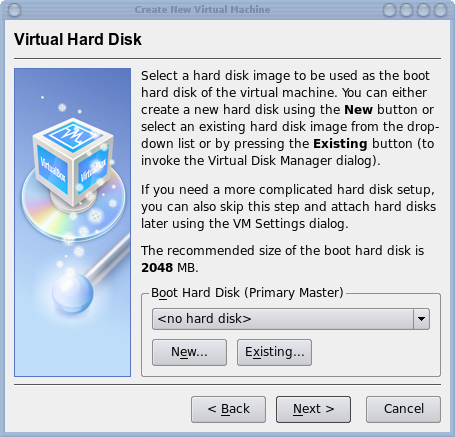 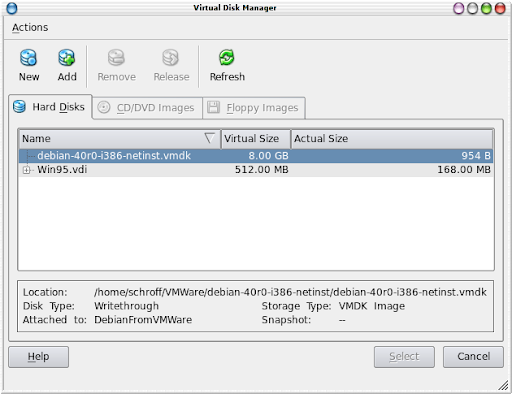 and added the vmdk-file from the debian-guest, which i used with VMWare Server 2.0.
So i thought, everything was ready but after pressing start the system stopped with:

After a short search, i found out, that VMWare prefers guest systems with SCSI hdd controllers and VirtualBox can only mount IDE hard disks. But this was not really a problem. I started the guest on VMWare and changed the following lines:
in /boot/grub/menu.lst
from kernel /boot/vmlinuz-2.6.18-4-686 root=/dev/sda1 ro
to root=/dev/hda1
and i changed in /etc/fstab all entries with sda to hda. After these changes, the guest bootet without a problem in my VirtualBox.
But it is clear, that with this configuration, it will not run on VMWare. So i changed in the .vmx file all entries form scsi0:0 to ide0:0 and in the .vmdk file the parameter adapterType=lsilogic to ide. Now the guest os is able to start in both virtualization servers.
So everything is ready for a comparison and there is an easy way for migrating from VMWare to VirtualBox, if i want to move...
If you to know how to configure networking via GUI, read this posting.
Posted by Dietrich Schroff at 8:11 PM