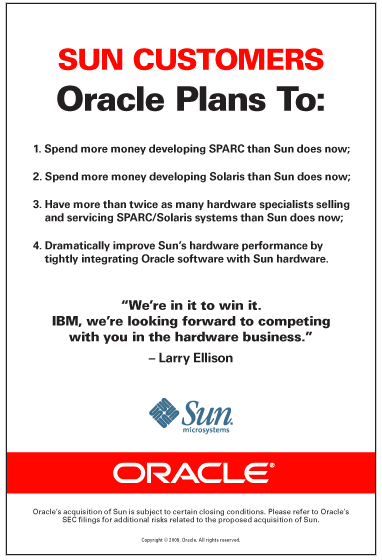 But why did they announce this now?
Here some answers out of the web:

The advertisement is a sign of how seriously Oracle views the Sun customer base as part of the value of Sun. At JavaOne, Ellison said Oracle has sold many database systems to run on Sun servers. Linux servers make up its fastest growing business, but Sparc/Solaris platforms remain its largest installed base, he said.
www.informationwee.com

Analysts see Oracle's ad as a defensive move ... Among the top hardware makers, Sun registered the biggest decline in server revenue in the second quarter, offering evidence that this protracted merger may be eroding Sun's value.
www.computerworld.com

Still, this may all be a little propaganda to ease the worries of the EU's Competition Commission, which has extended its investigation of the deal.
news.softpedia.com

This is very good news for us geeks; Oracle is promising to invest in not only Solaris, some decent competition for Linux, but also in the SPARC architecture. We're getting two alternative products for one here.
www.osnews.com

Many opinions and if you ask yourself, you will get even more ;-)

Posted by Dietrich Schroff at 9:22 PM